What makes narrow and thin close in meaning, and can they sometimes be interchangeable? What can be both thin and narrow at the same time, and what idioms with these adjectives are there? Read on to know the answers…

Something that is narrow measures a very small distance from one side to the other, especially compared to its length or height: 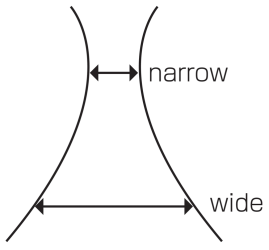 – a narrow strip of land/water

– a narrow belt of trees

If you describe someone’s ideas, attitudes, or beliefs as narrow, you disapprove of them because they are restricted in some way, and often ignore the more important aspects of an argument or situation:

If you don’t mind me saying so, you have a narrow view of socialism.

You have a narrow idea of what success means.

The bishops ignored this evidence to ensure that their own narrow, out-of-the-mainstream beliefs held sway. (= were the main influence on people’s opinions or behavior)

Finally, narrow means achieved with difficulty, in a way that shows how close the result was:

Our resolution passed with the narrowest possible majority.

After a narrow defeat against France last week,  it’s a must-win match against Tonga.

Danes voted by a narrow margin (= a small amount) to keep their own currency.

Something that is thin has a small distance between the top and bottom or front and back surfaces:

– a thin strand of trees

– a thin strip of land/water

Thin has many other meanings:

In this article we look at the adjectives thick, wide, and also broad. If you found this one useful, you’ll also like the follow-up. Thank you for reading!