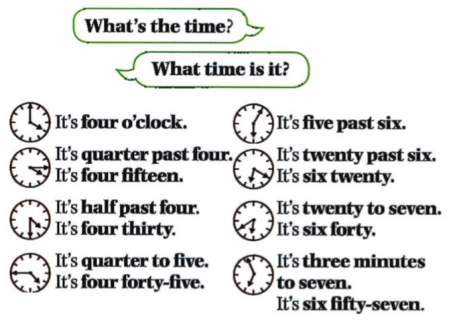 Use minutes with to and past when the number of minutes is not 5, 10, 15, 20 or 25 (it’s especially true for British English). Or say directly what you see on your watch/clock. For example:

What time is it in London/New York/Tokyo/Moscow?…

There is no exact definition of the time when afternoon, evening, night and morning start and end. However, we usually presume that afternoon starts at midday (12 noon/12 p.m.) and ends at roughly 6 p.m. Then evening starts and lasts until bedtime (or around 9 p.m., some people might argue). We can define night as the time between bedtime and morning (or between 9 p.m. and 4 a.m., some might say). Interestingly, morning is the period of time between midnight and noon (1 a.m. would be 1 o’clock in the morning). It is so difficult to define morning, afternoon, evening and night because these periods of time can vary according to people’s lifestyle and the hours of daylight in each season.

I starts work at 8 o’clock.

See you on Monday!

I don’t work on Saturdays.

The festival is on November 22.

It usually happens in October.

The garden is lovely in spring.

Where will you be at Christmas (but on Christmas Day)?

There will be a test at the end of the month.

We don’t use at/in/on before:

Let’s go out this evening (= tonight).

The garden was lovely last summer.